Home / Other Resources / Examples and Tools

This template offers a convenient means for aligning elements of your impaired driving logic model and the population you hope to impact with their indicators and measurements used.

Data and Sources to Collect about Consequences and Problem Statements

1) Fatal and Injury Crash Data – National Highway Traffic Safety Administration) NHTSA: this is generally a more reliable indicator of the level and type of impaired driving in your state and community than arrest data, which is dependent on the level of local law enforcement resources to conduct enforcement campaigns. NHTSA sponsors a data resource website called the Fatal Analysis Reporting System (FARS) that has multiple databases that can be searched at the state and county levels. Go to this web address for the site map.

3) Cost of Deaths from Crashes – The Centers for Disease Control and Prevention (CDC) have compiled this information by state.

* Note that special care is taken to respect compliance with laws that safeguard individual privacy  (e.g. HIPAA laws about medical records). Coalitions should receive information aggregated according by the above categories, so that no specific individuals are identified.

Data and Sources to Collect about Root Causes and Local Conditions

1) Number and Density of Licensed Drinking Establishments – your state alcoholic beverage control board or liquor commission can provide information about the number, type and location of establishments that provide beer, wine and/or distilled spirits for consumption on their premises in your community.

The Department of Treasury’s Alcohol and Tobacco Tax and Trade Bureau maintains a list of alcoholic beverage control boards and relevant liquor commissions.

2) Identification of Other Locations Where Drinking/Drug Use Occurs


3) “Circumstance of Last Use/Drink” self-report surveys – to get further information about settings and circumstances, some law enforcement agencies, DUI/DWI program providers and/or county health offices collect data from people arrested for impaired driving about the last place they drank before driving. Although we know that there is limited accuracy in this kind of self-report, many communities have discovered patterns in the results about locations (licensed alcohol establishments, parks, private parties, etc.) that have helped direct decisions about times and places for sobriety checkpoints, saturation patrols, undercover operations to stop sales to intoxicated patrons and other targeted enforcement efforts. 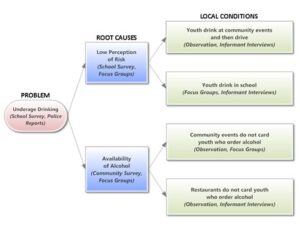 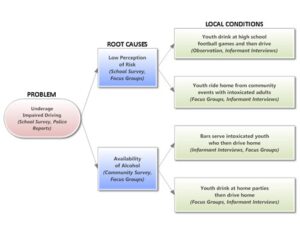 Root Cause: Availability of alcohol

Root Cause: Low perception of harm/consequences

Local Condition: Youth ride home from community events with intoxicated adult drivers who do not get cited.

The Problem of Impaired Driving